When it comes to Kratom, people may not always see eye to eye. However, someone’s negative opinion of this plant really does not matter when that opinion is up against FACTS and SCIENTIFIC EVIDENCE.

Below is an article SCIENTIFICALLY PROVING that Kratom does not recruit b arrestin, thus significantly decreasing any chance for respiratory depression/overdose.

‘Kratom’s primary alkaloids are Mitragynine and 7-hydroxymitragynine, and a scientific study found that these alkaloids are mu-opioid agonists, which results in pain and stress relief, but simultaneously are delta opioid antagonists and fail to recruit beta-arrestin-2.’

Below is a study proving the effects Kratom had on various individuals. Individuals were being treated for chronic pain, anxiety, and depression who ALL were treated successfully, with fantastic results, and high ratings of effectiveness.

‘Kratom May Have Less Abuse Potential Than Opioids’

‘The herbal supplement kratom may be less addictive and more effective for the management of pain than opioids, according to new research.’

‘2,798 kratom users – mean age 40 (SD = 12); predominantly White (90 %), female (61 %), and located in the US (97 %) – completed the survey. Kratom was primarily taken orally in doses of 1−3 g (49 %), with daily use (59 %) being most common. Kratom was used for pain (91 %), anxiety (67 %), and depression (65 %), with high ratings of effectiveness. 1,144 (41 %) used kratom to stop or reduce prescription or illicit opioid use, citing decreased opioid withdrawal and craving related to kratom use, with 411 reporting >1-year continuous abstinence from opioids attributed to kratom use. Roughly one-third of respondents reported adverse effects of kratom, largely rated as mild in severity and lasting ≤24 h. Seventeen participants (0.6 %) sought treatment for adverse effects. Fifty-six individuals (2 %) met DSM-5 criteria for a past-year moderate or severe kratom-related substance use disorder (SUD). When asked how troubled they felt regarding their kratom use, the mean (SD) rating was 3.2 (9.8) on a scale from 0 to 100.’https://www.psychiatrictimes.com/view/kratom-may-have-less-abuse-potential-opioids?fbclid=IwAR0SrRCf22qLwxBRSCnkRPxmTB_SBMQxufyBjQ8_zoaPJmPTxYHvzwUpKdY

‘The finding that MG reduced neuropathic pain through a mechanism requiring active α-adrenoceptors indicates that the pharmacological profile of MG includes activation of adrenergic, as well as opioid, systems.’

‘Rationale: Kratom is proposed to exhibit therapeutic potential as an opium substitute, but little is known about its dependence-producing profile, particularly of its main psychoactive compound, mitragynine (MG).’

‘Conclusion: The findings suggest that MG does not induce physiological dependence but can alleviate the physical symptoms associated with morphine withdrawal which represent the desired characteristics of novel pharmacotherapeutic interventions for managing opioid use disorder (OUD).https://pubmed.ncbi.nlm.nih.gov/31832720/‘

In the words of Dr. Jack Henningfield, Ph. D. ,, one of the world’s leading addiction specialists (Chief of Biology/Dependence and Abuse Potential Assessment) for the National Institute on Drug Abuse, a member of the John Hopkins University School of Medicine faculty, since 1978 and is presently Adjunct Professor of Behavioral Biology at the Medical School’s Department of Psychiatry and Behavioral Sciences ~ concludes that it is not an opioid by definition.

Mitragynine is the alkaloid in Kratom. Kratom leaves contain 25 identifiable alkaloids. Mitragynine (MG) and 7-Hydroxymitragynine (7-HMG) are the main psychoactive alkaloids in Kratom. MG and 7-HMG are PARTIAL agonists.

The big difference between Kratom and Morphine/opiates/opioids is this: NATURE GOT IT RIGHT. It has such low traces of 7-HMG and MG, that it cannot hurt you; but just enough to help you. Dependence is so low, to be harmful.

Opioids such as morphine, have negative side-effects on the central nervous system, including impairment/ drowsiness, brain fog, respiratory depression, and severe addiction with deadly withdrawals. Kratom does none of those things. Instead, Kratom’s alkaloids produce effects such as alertness and focus ~ the opposite of what morphine and high risk opioids do.

Lastly, Kratom doesn’t encourage a person to want to drink, along with it. It is the opposite. It makes you want to establish healthy habits, unlike opioids. ©KamiDavis2019

Saving the best for last, you will find below is the amazing study and article published by YALE JOURNAL of BIOLOGY and MEDICINE; clearly explaining a live clinical study done by them, indicating proof of Kratom’s safety and effectiveness. Participants who were longtime consumers experienced zero discomfort, no withdrawals, and no adverse reactions!

‘No adverse effects were observed in the study. All participants completed all study tasks and procedures, and none reported any discomfort or unusual symptoms. None of the participants reported withdrawal symptoms either using spontaneous self-report or had significant withdrawal symptoms based on the COWS scores. All urine toxicology screens conducted at the end of the test- ing day were negative.
All participants reported long histories of daily kratom consumption, with high frequency of daily con- sumption and substantial amounts consumed. It is not possible to quantify these reports into markers that could be used to approximate amounts of plant material or ac- tive ingredients consumed. However, despite the reported long duration and high levels of daily kratom consump- tion, during documented kratom discontinuation lasting from 10 to 20 hours, no participant reported or displayed discomfort, symptoms, or signs of potential withdrawal symptoms.
A substantial amount of misinformation has been published in literature and disseminated in media reports, creating a misconception that kratom is simply a danger- ous opioid. Kratom is a plant that contains many alka- loids and other potentially active substances [1,21,23]. Psychoactive effects of consuming plant material are likely to result from synergistic interactions among many substances, including possible competing agonist and antagonist effects on opioid and other receptors [21]’ https://://www.ncbi.nlm.nih.gov/pmc/articles/PMC7309661/pdf/yjbm_93_2_229.pdf

….And after everything you’ve just read, if you are still against Kratom remaining legal, then you are clearly part of the FDA’S disinformation campaign and purposely trying to break the system even more. 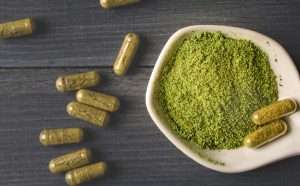 Create Your Own Kratom Tea Capsules

Who Is Dr Michele Ross?